An Early Beginning
A news item in the March 19,1857 Civilian, an Independence newspaper, noted that a festival had been held at the Empire House, that raised $200 for the initial funding for a library.

An organization was formed in that same year called the Independence Lyceum. Dr. C.A. Clark's office became the first library, located in the Wilcox building on the south side of main street. Dr. Clark became the first librarian, with approximately 300 volumes, many donated by members and loaned for a small fee.

In August 1869, the Independence Library Association was organized with a membership of 81 residents, who helped with the purchasing of books.

The First City in Iowa
Independence became the first city in Iowa to take advantage of the law that allowed a community to levy 1 mill per tax dollar for library use. The association changed the library's name to the Free Public Library in 1874.

A fire in May 1874 destroyed the library, with everything lost except the books on loan and the records. After the fire, the library board leased rooms on the second floor of the Morse building (The Buchanan County Title & Loan Company), until the Munson Memorial Library was built. 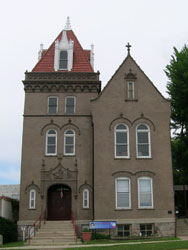 In 1855 Perry Munson came to Independence and built the Munson Block on the north side of Main Street. Mr. Munson donated funds to build an industrial training school for boys and girls as well as the library. Colonel Jed Lake donated the land adjacent to his mansion.


Munson chose architect J.C. Sunderland to design the building. The cost was estimated to be $25,000. The library building is 40 by 80 feet high with a basement and three stories. Original plans dedicated the first floor and basement to the high school training program, printing office, and young ladies' sewing program. The second story housed the library, and the third story housed the Y.M.C.A.
Located in front of the building is an unmarked tombstone. This is the burial spot of Mrs. Rufus B. Clarke, the first person to die in Independence. She died in September 1847.


Ground-breaking ceremonies were held on September 10, 1893 and excavation of the basement began. Perry Munson never lived to see the completed building. He died on December 30, 1893 at the age of 72.

The library is the second building in Buchanan County included in the National Register of Historic Places. In 1988, the name changed to Independence Public Library, returning to it's original name in 1857.
Planning for a New Facility
The 2,341 square feet utilized for the public library was not enough to give the community library services related to the 21st Century. Planning for a new Independence Public Library began in 2004. The plan included utilizing the site of the old hospital at 805 First St. East for a 14,200 square foot building.

The majority of the funding for the New Independence Public Library was through private donations. The City of Independence gave $700,000 to go towards construction of the building from Community Betterment Funds. A group of community members solicited funds from individuals, families, and businesses with amazing results. Private donations came in over $1.8 million. With a $550,000 grant from Vision Iowa and large grants from McElroy and Carver Foundations, the total raised exceeded $3 million. This was enough to build and furnish the new facility.

2008 Grand Opening
Groundbreaking was held May 12, 2007 and construction was completed in August of 2008. Contents of the Munson Building were auctioned or moved to the new library by community volunteers. On Sept. 10, 2008, the public was invited to come and enjoy the new building. Grand Opening was held Oct. 12, 2008, with over 700 attending. The library has seen amazing growth in visitors, check outs, and computer usage since opening the new facility. 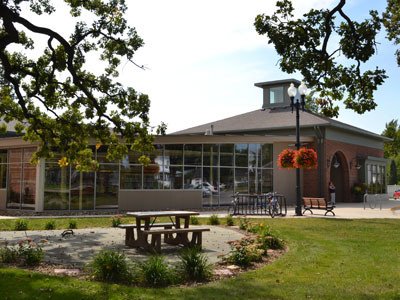