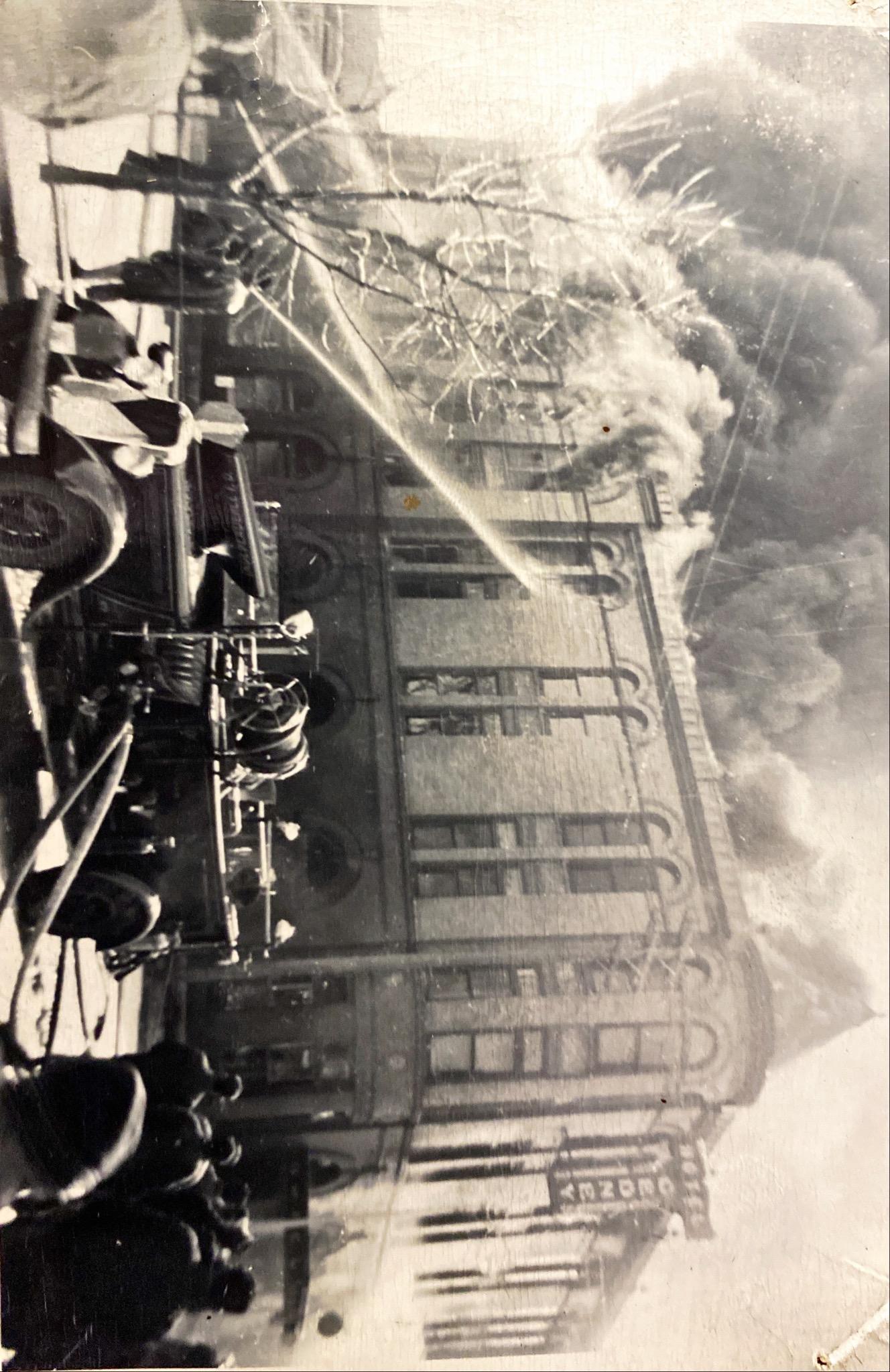 After the occurrence of a severe fire in Independence in 1864 the grave necessity of having some more successful means with which to combat the fiery elements was fully appreciated and straightaway some of the public spirited citizens proceeded to organize a hook and ladder company. At their first meeting in March, 1864, they elected the following officers: Foreman, Ransom Bartle; first assistant foreman, C. F. Leavitt; second assistant foreman, R. M. Chesty; secretary, J. M. Weart; treasurer, J. F. Hodges; steward, A. J. Howley; member of executive committee, J. B. Donnan. Immediate measures were taken to raise funds to buy  fire apparatus. All sorts of public entertainments were given whereby to create a fund and, like the town bell, for months it was the absorbing interest and object of all public benefits. The firemen were the instigators and moving spirit for all public affairs. They were in charge of the Fourth of July celebrations, which were always a pronounced success, and of Washington's birthday celebration in 1865. Finally the funds were sufficient to buy an engine.

They expended $525 for an engine, hook and ladder, and hose.

In the spring of 1862 a hook and ladder company, Fire Company No. 2, was organized. They built a truck house near the old bell tower adjoining the house of Company 1. This house is now used as a store house back of the wigwam.

Every night fire drills were held for the purpose of perfecting themselves in marching and parade duty.

They bought a big Cataract hand engine which cost $1,000, and 400 feet of hose. Louis Soener was foreman and Adolph Leytze, Sr., secretary. The old hand Cataract engine was also in service during the big fire and was placed on the east bank of the river south of the Main Street Bridge, but was disabled by the collapse of the Wilcox Building, which cut off the hose.

The old "Cataract" engine, which did such good service during the big fire, was, after Independence got through with it, sold to Earlville. It was an unwieldy affair and required a small regiment of men to move and operate, but it did good work in its day and was a prize winner at the tournaments. It was constructed in 1852 and was used in Philadelphia for a long time and in Peoria, Illinois, before Independence got it.  Several other places owned it before Earlville came into possession of it.

It was in a good state of preservation when Eariville sold it to the Howe Pump and Engine Company of Indianapolis, Indiana. 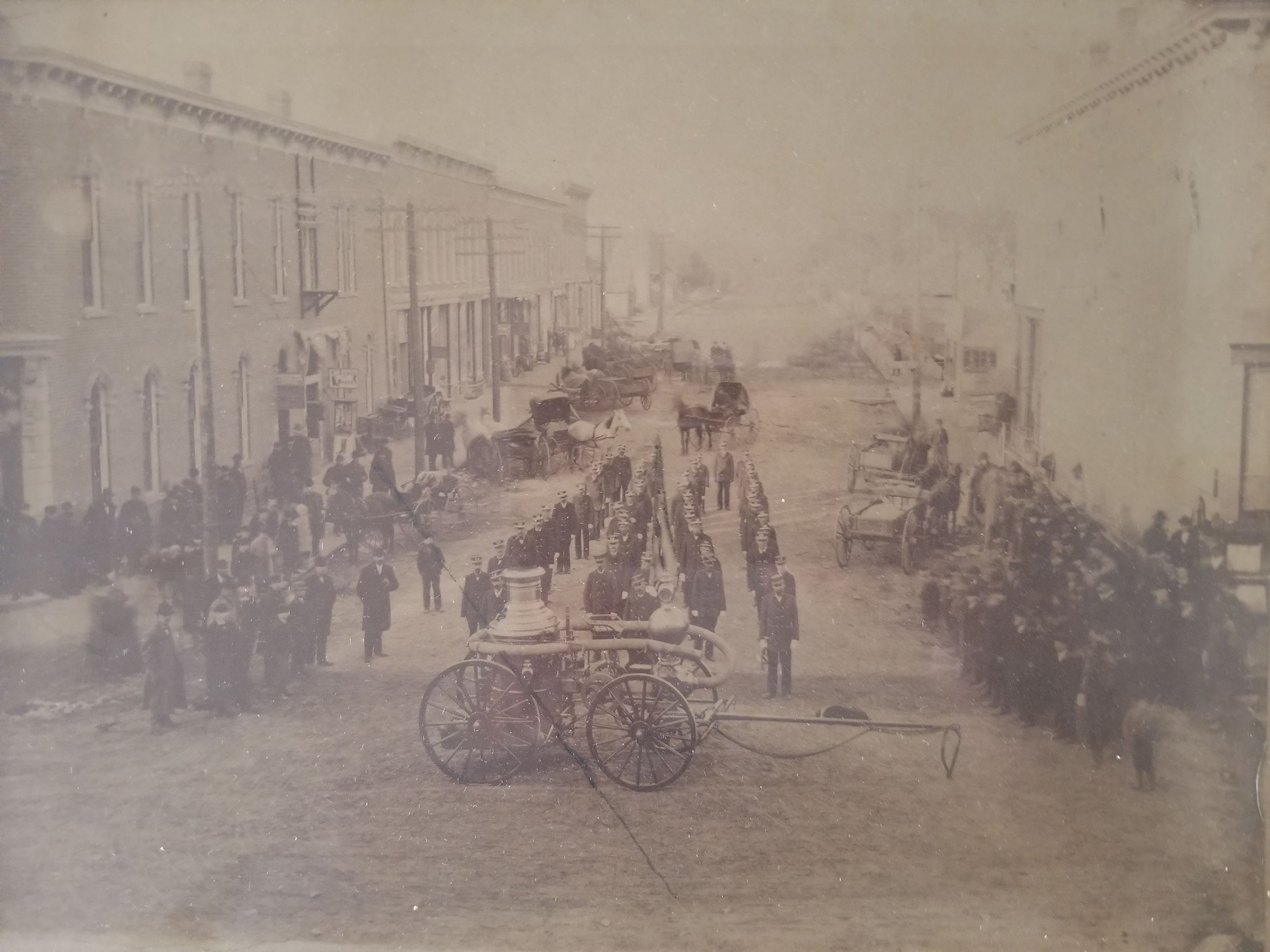 In the city election in March, 1873, the proposition to establish a city library and to purchase a steam fire engine were both decided in the affirmative.  The first project by a majority, which was a compliment to the intelligence and public spirit of the citizens, and the last, none too soon for the engine purchased arrived just in time to do effective work at the fire. Several engines were tried and finally a Clapp & Jones engine was purchased.

The steamer engine used by this company was purchased with money subscribed from the citizens and money which was gotten from public entertainments, dances, public dinners, and other forms of entertainment. This engine for many years held the record and had the distinction of never having been beaten in getting up steam from cold water and throwing water 100 feet. This engine did service for many years and the last time it was in use was at the fire in the W. A. Jones stockyards, situated by the South Bridge, the water being pumped from the river where the Second Street Bridge is now located. This engine made its last public appearance in the parade during the street carnival in 1899. This engine was sold to the W. S. Knott Company, of Minneapolis, Minnesota, for 800 feet of hose.

The first appearance of this engine was at the big fire of 1874. This engine had been sent here for trial and at this time stood on the flat car at the Illinois Central Depot and was brought downtown and placed on the river bank by the Klotzbach barn. When it started in operation it was run without any steam or water gauge by Mr. A. D. Guernsey. This was a very hazardous undertaking and proved Mr. Guernsey to have been a true hero. Probably this daring feat saved the city many thousands of dollars of loss.

This engine was entered in numerous contests throughout the state and always was victorious. Instead of the laurel wreath the old engine brought home a broom, and had received numerous valuable money prizes. The members of the company comprised the foremost citizens of the town, were finely uniformed, expending something like one thousand dollars on their regalia. On June 15, 1885, the Independence Steamer Company went out of existence and the company voted to change its name to the C. M. Durham Steamer Company. This company and the Cataract Company were located at the engine house on Main Street, and Fourth Avenue S. E. 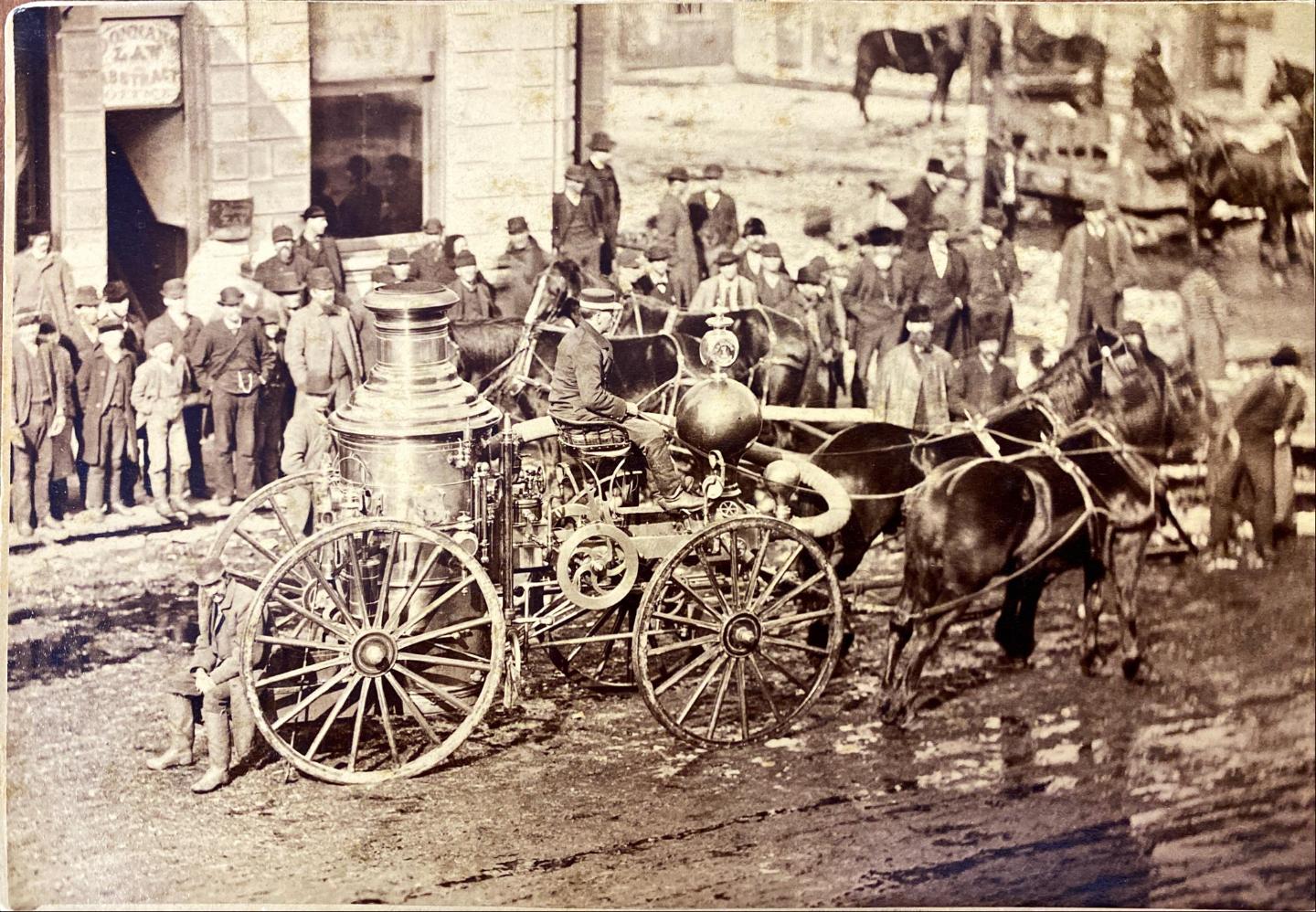 The steamer engine and old hand Cataract engine proved to be to heavy and unwieldy.  The idea was conceived to make a smaller hand engine that could be quickly drawn to fires and in through gates for the purpose of rendering aid until a larger apparatus could be placed in position. This company was known as the Boys' Wapsie Hand Engine Company.

The engine was built about the year 1878 by William and Bernard Yeager and Frank Megow, and was painted by Miss Rosie Otto.

The company was composed of boys ranging in ages from ten to fifteen years old. The first money for the purchase of this engine was made from the sale of old bones and contributions from the citizens for services rendered. It was stored in a shed on the ground now occupied by the Wise Block.

The engine was later sold for junk for $5.00, and the wheels 'were used by Charles Robinson for a buggy. This engine, though small, did excellent service and would throw water 75 to 100 feet.

After the Second Ward Schoolhouse fire the need of a hook and ladder company was very apparent and steps were immediately taken by the city to purchase a hook and ladder truck.  They  purchased one from L M Rumsey, of New York.

A meeting was held at the office of Hunter & Forrester, February 17, 1883, at which a company was organized to operate the truck. C. A. McEwen was elected foreman; S. B. Hovey, secretary, and W. H. Jacobs, treasurer.

The truck was stored in the Lee Building on East Main Street, now occupied by the Jones & Raymond garage. Upon the reorganization of the fire department in 1887, it was moved to the engine house on Main Street at the corner of Main and Fifth Avenue.

This company made an enviable record at the Dubuque State Fire Tournament, being beaten for first money by one fifth of a second. In 1897 the truck was overhauled and a Seagrave truck ladder and chemical fire extinguisher were added.

This company, on account of the natty appearance of their light grey uniforms and the large, heavy truck which they used were known as the "Dude runners with the jumbo truck."

At a meeting held May 17, 1887, the Warne Hose Company came into existence. The meeting was called for the purpose of organizing a west side hose company. Ira B King was elected foreman; Carl Goodwin, secretary, and L. S. Lyon, treasurer.

After various names had been submitted the one above was selected. The company was known as the Warne until a special meeting, March 9, 1889, when the present name, The Excelsior Hose Company, was substituted, and has ever since been in existence.

This company was quartered in a barn on the ground now occupied by the J. E. Moore residence in the Fifth Ward, later being transferred to the hose house on Main Street, west of the Presbyterian Church. 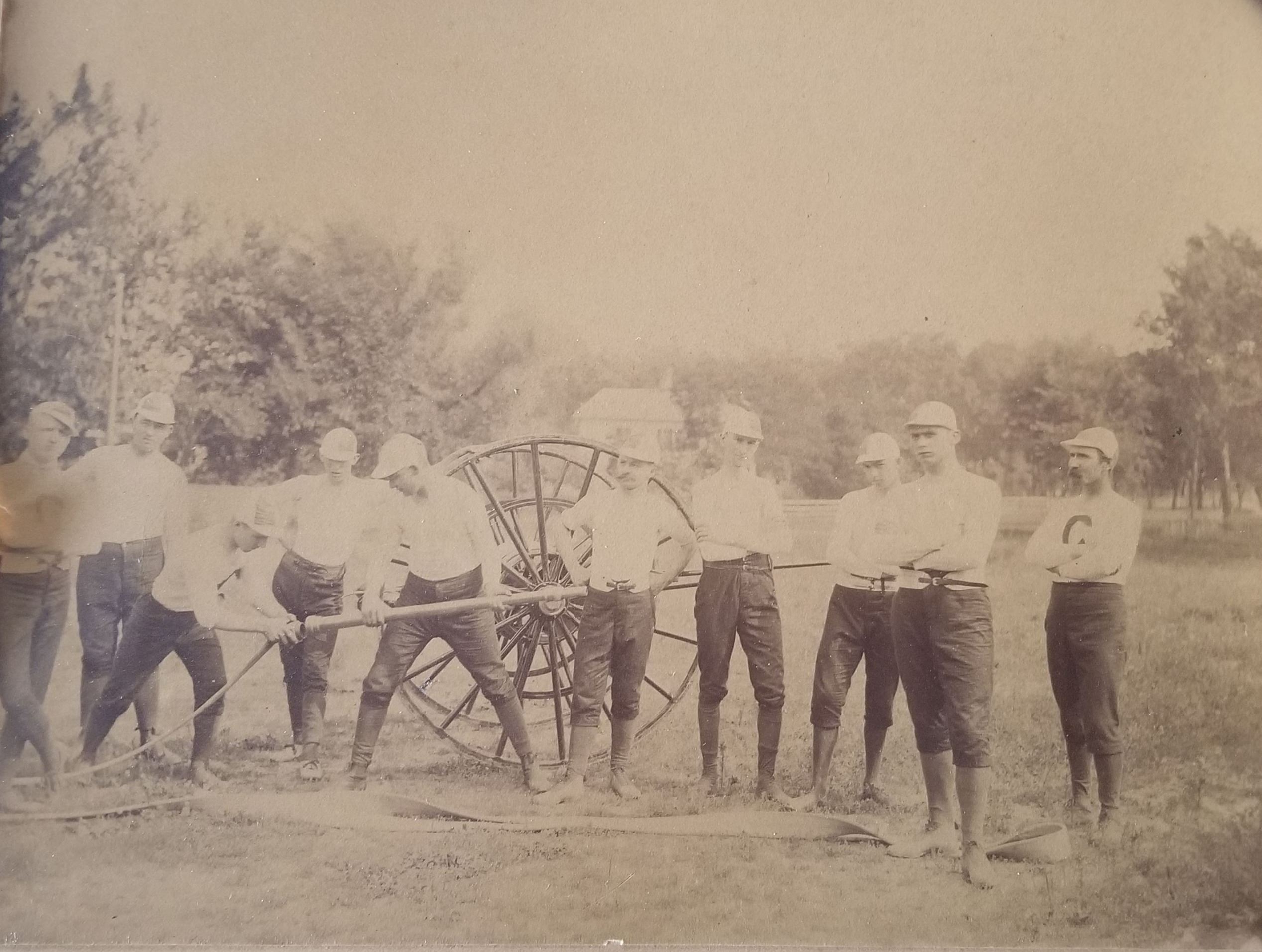 THE A. D. GUERNSEY HOSE COMPANY

In June, 1895, the fire department decided to take part in the State Firemen's Tournament at Vinton. The company was organized and sent under the name of the A. D. Guernsey Hose Company. They were successful in winning the first money in the amateur class and equaling the state record of forty five seconds. Waldron, the leader, winning the leaders' race of 300 yards in 31 3/5 seconds. At first it was quartered in the engine house on East Main Street, then was removed to a house adjoining Joslinville, and later the house and company were moved to Third Avenue Northeast, north of the old high school. 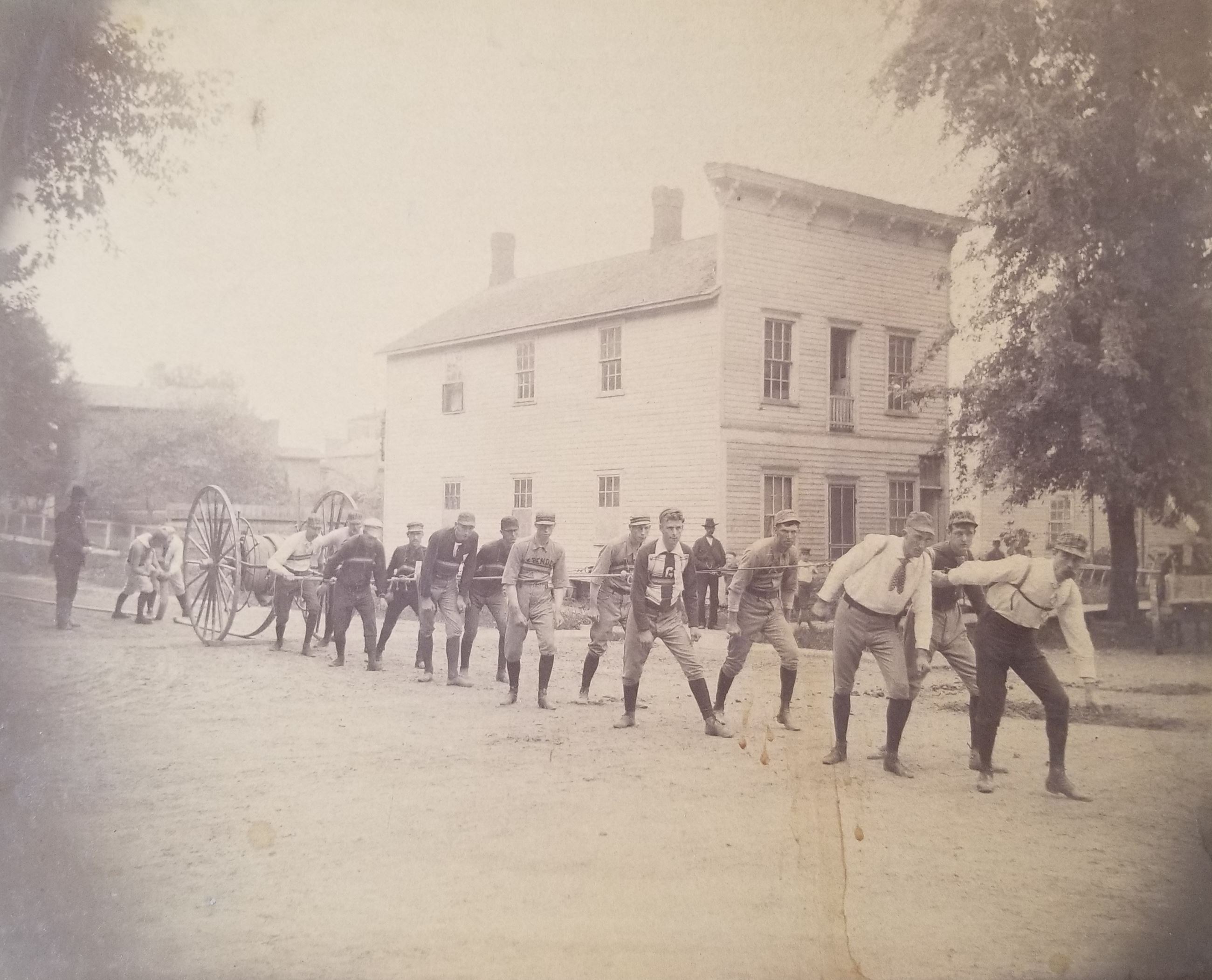 The Clipper Horse Company was organized May 6, 1887. John F. Iekel was elected foreman; Charles L. King, secretary, and Louis C. Soener, treasurer. This company is quartered in the engine house on East Main Street. It has taken part in a number of state tournaments.

In 1912 a chemical hand engine was added to the company and placed in the engine house.

On March 5, 1901, two fire alarms were sounded for two different fires at the same time, this being the only instance in the history of Independence.

The department has had fourteen chiefs, T. J. Marinus being the first, and the present chief is E. W. Raymond.

Each company draws $75.00 a year from the city, the chief's salary being $100.00. The hose companies comprise eighteen members each and the hook and ladder company has twenty five members.

These carts were later replaced by a lighter and new two wheeled carts.

The first fire alarms were given by the old town bell. By a vote of the citizens this was discontinued and the steam waterworks whistle was voted to be used for that purpose.